Modelling T2D accurately in the laboratory without the use of genetic models has proven difficult. The most commonly used T2D rat model is the high-fat-fed (HFD) plus streptozotocin (STZ) injected model. Thus far, studies have utilised either intraperitoneal or intravenous injections of STZ to reduce β-cell number and function. However, the extent of β-cell death using injection methods is exceedingly difficult to control/predict between animals due to single-pass effect of STZ on β-cells. We sought to identify a novel mode of administering STZ to consistently and reproducibly induce T2D. Male Sprague-Dawley rats were maintained on HFD (40% energy from fat) for three weeks, then treated with STZ for an additional 2 weeks. STZ was prepared in citrate buffered saline (pH4.4) and 2ml total volume was loaded into osmotic mini-pumps (2ML2). Mini-pumps were implanted subcutaneously and delivery of STZ occurred at a constant rate of 5µl/hr for 14 days. Intraperitoneal glucose tolerance tests (GTT; 1g/kg) were conducted at baseline (Day0), after HFD (Day20), and after HFD+STZ (Day35) to measure the degree of insulin resistance/glucose tolerance (Figure1). Osmotic mini-pump delivered STZ caused a dose-dependent and reproducible increase in glucose intolerance (Figure1). Thus, HFD and osmotic mini-pump delivered STZ allows for titratable induction of T2D in rats. This is a powerful methodological advance that will allow researchers to more accurately investigate the suite of diabetic complications which arise at different time-points in the T2D continuum. 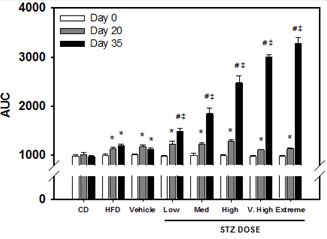