We aimed (i) to investigate the prevalence of diabetes amongst patients hospitalised with decompensated heart failure and (ii) to assess the association of diabetes with hospital outcomes and mortality in these patients.

HbA1c testing was performed on all inpatients aged ≥54 years admitted to a tertiary hospital between July 2013 and January 2016, as part of the Diabetes Discovery initiative. Heart failure admissions were identified using ICD-10 codes. Baseline characteristics were obtained from hospital records. Diabetes was defined as HbA1c ≥6.5%, and pre-diabetes as HbA1c 5.7% to 6.4%. Outcomes were length of stay (LOS), Intensive Care Unit (ICU) admission, 28-day readmission and 6-month mortality.

1191 heart failure admissions with an HbA1c result within 90 days prior to or 7 days post-admission were identified. Of these, 49% had diabetes, 34% had pre-diabetes and 17% did not have diabetes. Patients with diabetes were younger than those with pre-diabetes or without diabetes (Table 1A). Using a multivariable analysis adjusting for age, Charlson comorbidity score and estimated glomerular filtration rate, there was no evidence of diabetes being associated with length of stay, ICU admission or 28-day readmission. However, the presence of diabetes was associated with a lower risk of 6-month mortality (Table 1B). This finding was also supported using HbA1c as a continuous variable.

Nearly half of patients admitted with heart failure had diabetes, with a further one third having pre-diabetes. The presence of diabetes was associated with lower 6-month mortality. These observational data are hypothesis generating. A possible explanation is that patients with diabetes are more likely to be on drugs that prevent cardiac remodelling, such as renin-angiotensin system antagonists, which may modulate the severity of heart failure and its consequences.  Further work is underway to determine the medication history as well as echocardiographic parameters. 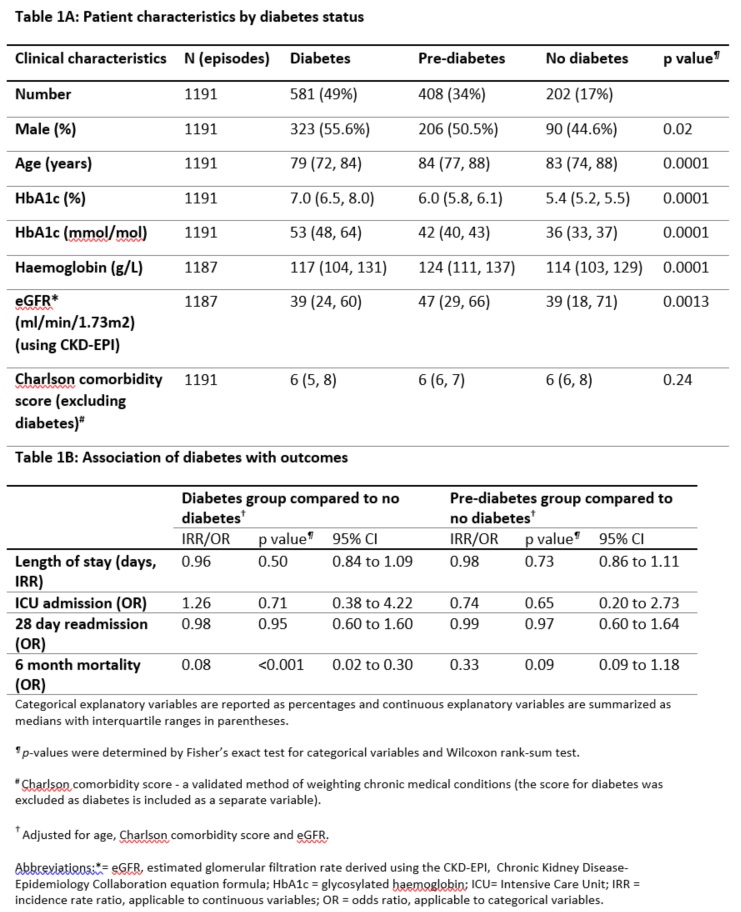