Are we too reassuring to our patients with young onset type 2 diabetes? (#75)

Young onset type 2 diabetes mellitus (YT2DM) is associated with high relative morbidity and mortality and its management is known to be difficult. A previous on-line survey of patients with YT2DM in Australia had mainly assessed their psychosocial aspects and their opinion of the available diabetes services.  Our study focused more on determining which health professionals were involved in the treatment of YT2DM, their perception of the severity of the diabetes and the reasons for controlling various risk factors.  Their adherence to taking diabetes medications was also assessed.

Our electronic database was searched to identify patients diagnosed with type 2 diabetes between 15-30 years of age who had attended the Diabetes Centre in the last 4 years. Forty-two patients were approached to answer a questionnaire and 29 responded (13/25 current age30yrs). People with YT1DM age

Although people with YT2DM were usually informed of the importance of maintaining normoglycaemia and controlling cardiovascular risk factors, they were often told by health professionals that they have a milder form of diabetes for which lifestyle modifications are more important than taking medications. Perhaps due to this perception of “milder diabetes” by both doctors and consequently patients, people with YT2DM were mainly treated by GPs, and less likely to have input from dietitians and educators than their YT1DM counterpart.   They also tested BGL less often and had higher medication non-adherence. These factors could be significant contributors to worse outcomes. The myth of YT2DM being a “milder diabetes” can arise from a lack of awareness but may also be a result of health professionals trying to be kind and reassuring.   How to abolish this myth without aggravating the psychosocial difficulties already confronting young people is the challenge. 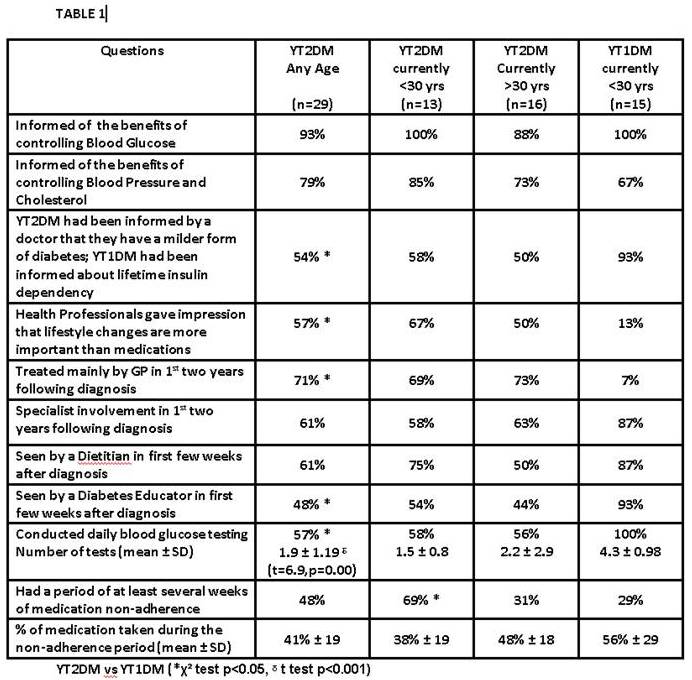