Addition or Switch to Insulin Therapy in Patients Treated with GLP-1 Receptor Agonists: A Real World Study in 66,583 Patients (#57)

Background: Real-world outcomes of addition or switch to insulin therapy in type 2 diabetes patients, who failed to control HbA1c with Glucagon-like peptide–1 Receptor Agonist (GLP-1RA) treatment, are not known.

Aims: This real-world based longitudinal study evaluates (1) the changes in HbA1c and cardiovascular risk factors over 24 months, (2) possible benefits of adding or moving to insulin treatment post GLP-1RA initiation, and (3) the likelihood of reducing HbA1c < 7% in those who intensified GLP-1RA treatment with insulin earlier.

Methods: A cohort of 66,583 patients who received GLP-1 RA therapy for a minimum of 6 months, without previous insulin treatment, was selected from the Centricity Electronic Medical Record Database of USA. Those who added insulin (n=39,599) and those moved to insulin upon GLP-1RA cessation (n=4,706) were identified, and 6-monthly adjusted changes in HbA1c, body weight, systolic blood pressure (SBP), and LDL-C were estimated.

Results: With baseline HbA1c of 8.2%, HbA1c was reduced by 0.73% at 6-month, with no further glycaemic benefits over 24-months follow-up in patients treated with GLP-1 RA only. The addition/ switching to insulin therapy occurred at median 3/14 months of follow-up with an elevated HbA1c level of 8.8% / 9.3%. Adding insulin within 6-months of GLP-1RA initiation was associated with 18% higher odds to achieve HbA1c below 7% at 24-months, compared to adding insulin later. Addition of insulin reduced HbA1c significantly by 0.55% over 24-months, while moving to insulin did not yield any glycaemic benefit (Figure 1).  Irrespective of intensification with insulin, weight/ SBP/LDL-C were significantly reduced by 3 kg/ 3 mmHg /0.2 mmol/L over 24-months.

Conclusion: Earlier addition of insulin resulted in better glucose control, while switching to insulin was not beneficial during two years of treatment. Non-responding patients on GLP-1RA would benefit by adding insulin therapy significantly, rather than switching to insulin. 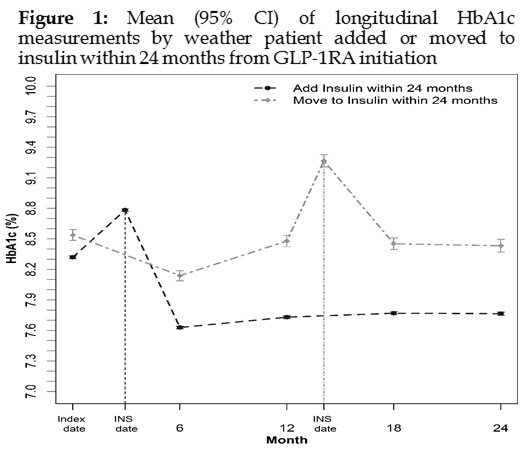