Quantifying and Predicting Mean A1C Reductions for Exenatide QW and BID: Importance of Baseline A1C and Other Patient Characteristics (#56)

There is considerable variation between individuals in regard to the A1C response to therapy. We aimed to quantify and predict responses to exenatide once weekly (ExQW) and twice daily (ExBID). Data were pooled from trials which had a duration ≥24 weeks and included self-monitored blood glucose profiles (ExQW, N=941 from 5 trials; ExBID, N=1414 from 8 trials). Patients were divided into higher, average, and lower A1C responders at 6 months, based upon tertiles of linear regression residuals that were corrected for individual participants’ baseline (BL) A1C. Putative predictive BL variables were summarized by tertile. Most patients responded to ExQW or BID. Despite the markedly different A1C changes in the tertile determination, BL A1C levels were similar among the tertiles (Table). Most variables did not differ by tertile of response, and most differences between the first and third tertiles were minor (Table). Individual BL characteristics of higher responders to ExBID were Asian ethnicity, and lower fasting and higher post-breakfast glucose. Higher response to ExQW was seen in patients on diet/exercise or metformin alone. In conclusion, we identified different predictors of response to ExQW and ExBID, which may be related to continuous vs intermittent exposure to exenatide. 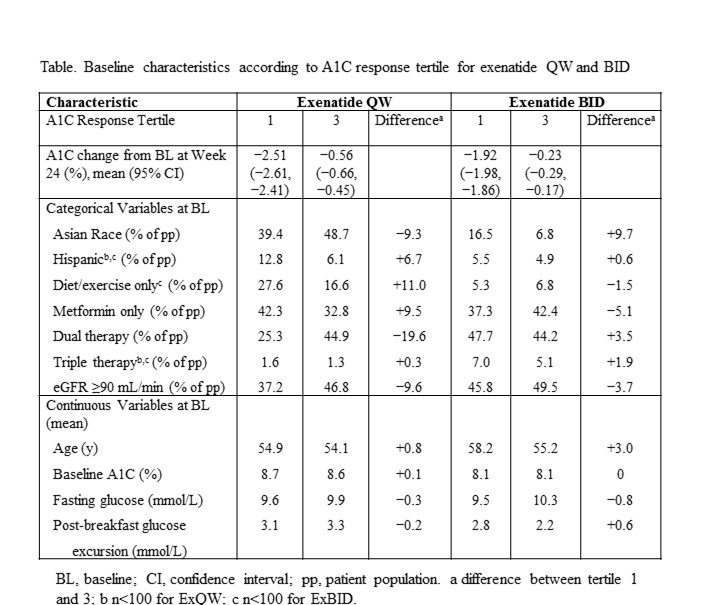